My dad is preaching a series this month on becoming a lion chaser.  He’s using Mark Batterson’s “In the Pit With A Lion On A Snowy Day” as a foundation for this series.  Well, that and the bible, of course.  Dad and I have talked a lot about this series.  Mostly, what it means to be a lion chaser.  As a mother of three, yes THREE, children, I am thinking constantly of how to raise my own lion chasers.  Because, our greatest regrets in life will be the lions we did not chase.

Can I just pause right now and insert how much I LOVE being a mother right now?  Today.  In this world.  In this culture.  In this chaos.  In this uncertainty.  In these times labeled as scary.  Uncertain.  With echoes of “this world is going to hell in a handbasket.”  Because, I know that it’s in these times that God does His thing.  HIS thing.  He always prevails.  It IS His world, by the way.   And, I’m so pumped to be raising my children in a time where seeing the glory of God is just inevitable.

Back to chasing lions and kicking, well, kicking tail. 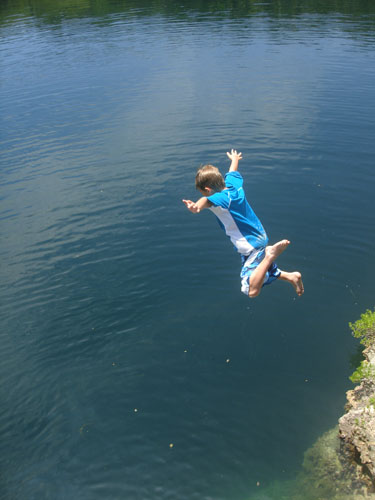 He is my very cautious seven-year old.  He looks before he leaps.  He analyzes his moves long before he makes them.  So, I found it very uncanny that he would be the first kid out of six to leap off of a 25 foot drop into what’s called the “Blue Hole” on a recent vacation to Bahamas.  That right in the middle of our many talks about being a lion chaser, my very reserved son became a fearless….warrior.

So, now?  I’ll tell him the story of Benaiah.

And, I’ll remind of him of this obscure story for the remainder of his days as long as he lives down the hall from me.  Because, I know…..

Paid for over two-thousand years ago.

Benaiah chased a lion down into a pit. Then, despite the snow and slippery ground, he caught the lion and killed it. II Samuel 23:20

Tagged as Benaiah, fears, In the Pit With A Lion On A Snowy Day, lion chasers, Mark Batterson, overcoming